UPDATE 2022-03-17: Trend Micro published research detailing ASUS devices also being impacted by Cyclops Blink (some ASUS device IPs were included in our second special report, but not explicitly called out at that time, since details were not public).

On May 23rd 2018, the US Department of Justice (DoJ), Federal Bureau of Investigation (FBI) and Cisco Talos publicly announced the disruption of a novel multi-stage modular malware platform called VPNFilter. This was designed to infect small office and home office (SOHO) routers and other network devices. At the time, VPNFilter was believed to be operated by the threat actor known as APT28 (also known as Fancy Bear, Pawn Storm, Sandworm, Sofacy Group, Sednit X-Agent, STRONTIUM and Tsar Team), which was allegedly associated with the Russian military intelligence agency (GRU). You can read more about that sinkholing effort in our original 2018 blog post, which includes links to supporting technical information.

Since then, we have continued notifying VPNFilter victims about infected devices worldwide via Shadowserver’s free daily network reports.

In January 2021, we collaborated with partner Trend Micro on a joint analysis of the remaining global VPNFilter victim population. This added some further scan-based insights about third stage victim prevalence into our daily datasets.

From our vantage point as sinkhole operators, the peak day for VPNFilter infections globally was 2018-07-24, which saw 14,966 unique IP addresses being observed hitting the sinkhole. After the initial fairly rapid (by global Internet response standards) remediation of infected devices, a typical long tail of not yet remediated victims still remains today:

Note the lack of variation in the daily/weekly number of detected IP addresses. As expected, this suggests that the infected devices are always-on routers (which is unlike the typical overnight or weekend patterns of change we usually see in sinkholed home or office PCs).

The IP-geolocated distribution of sinkholed VPNFilter unique IP addresses on that peak day was:

With Ukraine having by far and away the most infected victim devices.

On February 23rd 2022, the UK National Cyber Security Centre (NCSC), the Cybersecurity and Infrastructure Security Agency (CISA), the National Security Agency (NSA) and the Federal Bureau of Investigation (FBI) jointly announced that they had identified that the threat actor known as Sandworm or Voodoo Bear has deployed a new, large-scale modular malware framework which is affecting network devices. They have named the malware Cyclops Blink. The NCSC, CISA, FBI and NSA have previously attributed the Sandworm threat actor to the Russian GRU’s Main Centre for Special Technologies GTsST.

The Cyclops Blink malware is believed to be a more advanced replacement for VPNFilter. It is installed on exploited network devices as part of a legitimate firmware upgrade, allowing persistence between reboots. The UK NCSC’s analysis explains that it is possible to recalculate the Hash-based Message Authentication Code (HMAC) value for the modified firmware image because the WatchGuard FireBox devices use a hard-coded key to initialize the hash calculation. This allows their malware to pass checks and appear to be legitimate, vendor-supplied firmware updates.

Infected victims’ devices are grouped into clusters, each with a list of Command and Control (C2) servers. They communicate with their operators using Transport Layer Security (TLS) running over The Onion Router (Tor) network. To date, Cyclops Blink malware is believed to have been primarily deployed onto WatchGuard firewall devices (which are Linux ELF 32-bit PowerPC big-endian platforms), and all C2 servers identified to date have been for WatchGuard firewalls. However, the assessment published today indicates that it is likely that the Cyclops Blink malware could also be compiled and deployed onto other architectures and firmware. This botnet appears to have been active since at least June 2019.

A detailed technical analysis of Cyclops Blink by the UK NCSC can be found here, which includes Indicators of Compromise (IoCs) and YARA signatures to assist in detection.

WatchGuard estimate that Cyclops Blink malware may have infected approximately 1% of WatchGuard firewall devices. They advise that the default configuration is to prevent access to their management interface from the Internet, so this configuration must be manually enabled by the system administrator.

All WatchGuard device owners should follow each step in these instructions to ensure that devices are patched to the latest version and that any infection is removed.

We send out Special Reports whenever we are able to share one-time, high value datasets that we feel should be reported responsibly for maximum public benefit. Although the events included in these Special Reports sometimes fall outside of our usual 24-hour daily reporting window, we believe that there would still be significant benefit to our constituents in receiving and hopefully acting on the data.

A direct link to the Cyclops Blink Special Report format is here.

The data contained in this new Cyclops Blink Special Report was provided to Shadowserver to disseminate rapidly to National CERTs/CSIRTs and network owners globally, to maximise remediation efforts.

Of the 1,573 IPv4 addresses included in the Cyclops Blink Special Report, the majority of likely infected network devices IP-geolocate as being located in the United States, Canada and Central Europe: 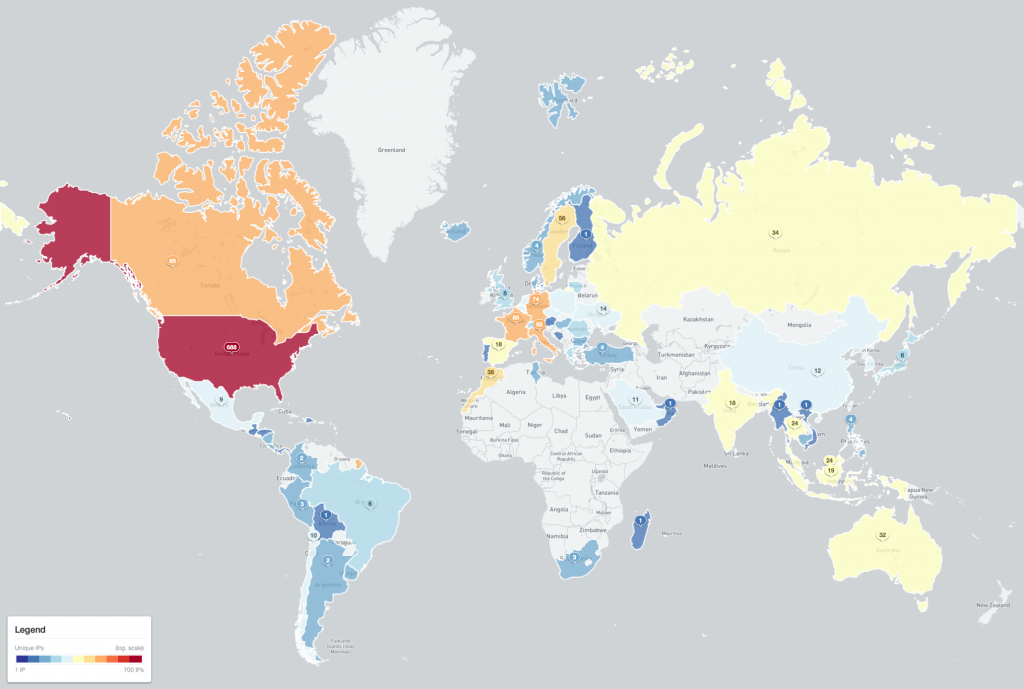 Looking at the data in another way, more than half of the network devices believed to be infected with Cyclops Blink malware are located in the United States, France, Italy, Canada and Germany: 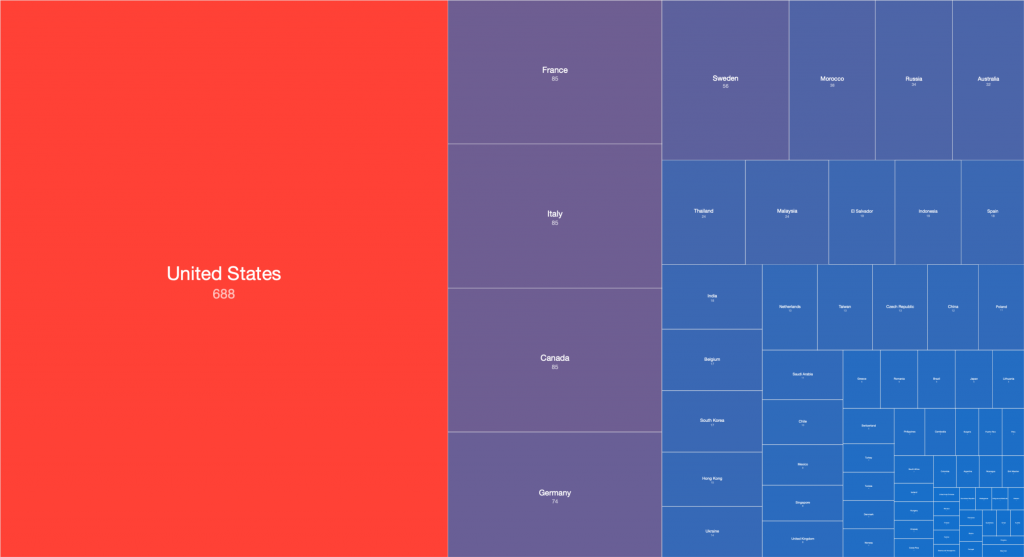 Shadowserver conducts daily Internet-wide scanning of all IPv4 /0, which includes identification of Internet facing devices, where possible, thanks to the EU HaDEA VARIoT project. We began making this information available to National CERT/CSIRTs and Network Owners who subscribe to our free daily network reports in the form of our Daily Device Identification Report in September 2021, which can be used to establish your exposed attack surface. We highly recommend subscribing and reviewing this report for your network, since this is the same profile an attacker scanning to perform reconnaissance from the outside will also see.

The location of the likely Cyclops Blink infected devices generally matches our scan-based understanding of the global distribution WatchGuard firewall devices which are currently exposed to the Internet: 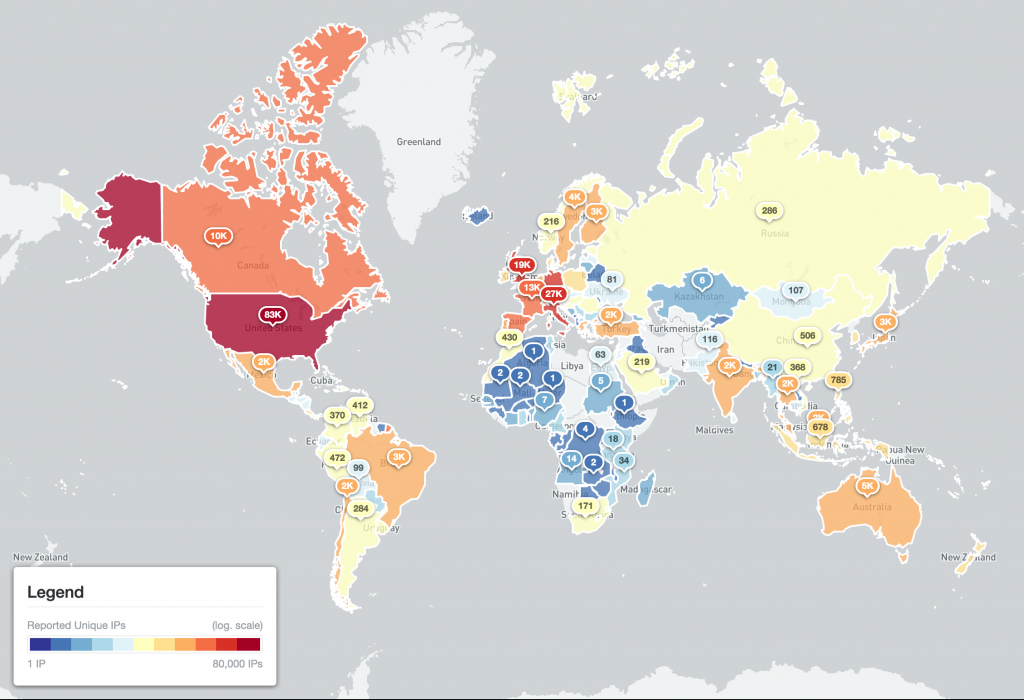 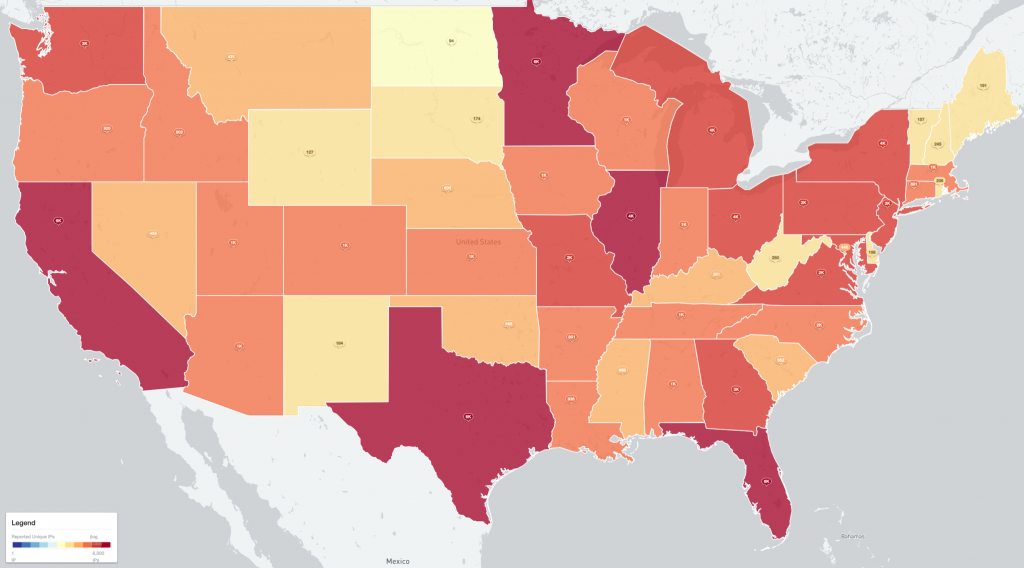 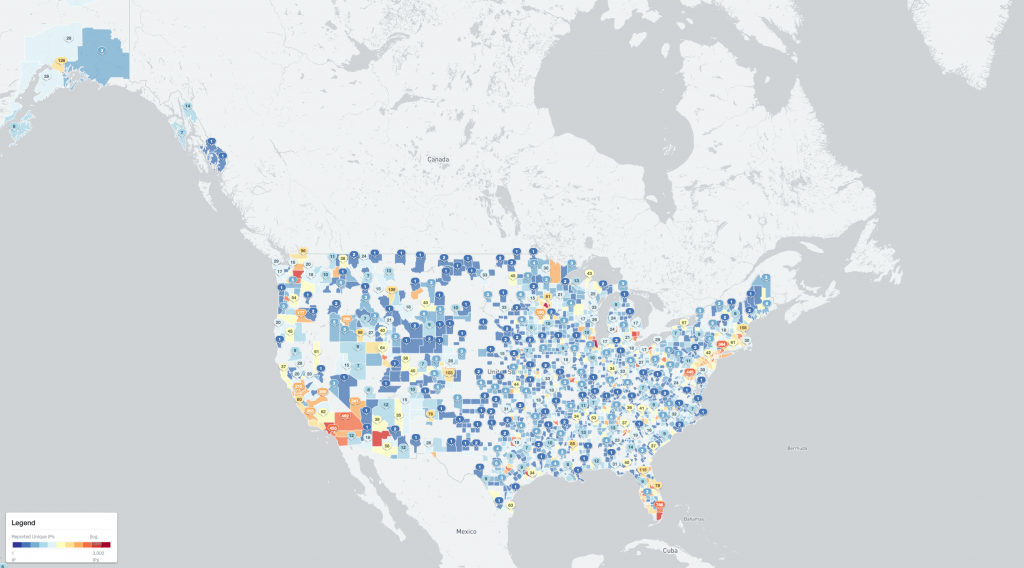 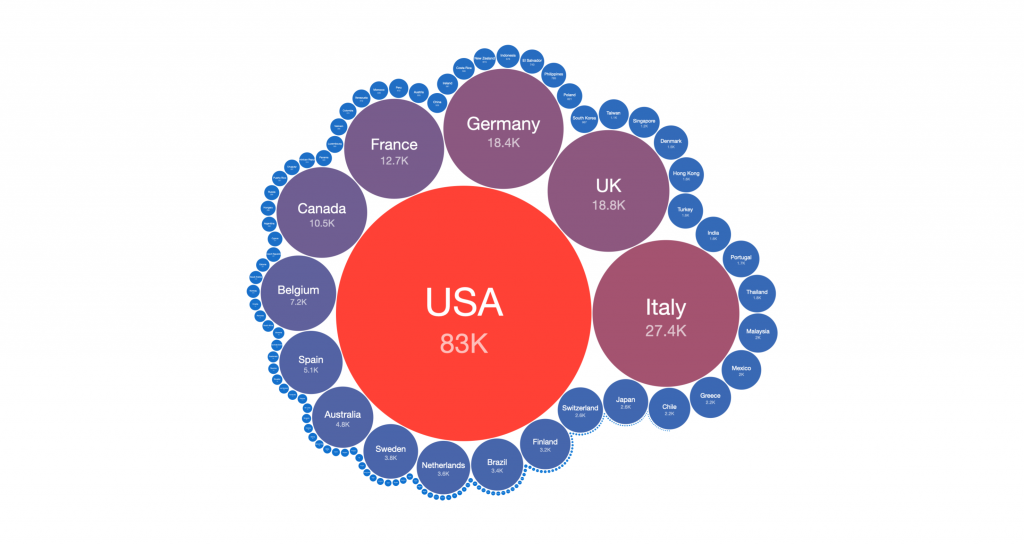 Shadowserver’s daily scanning will obviously not detect all WatchGuard devices. However, comparing the 1,573 unique IP addresses reported out as potentially infected with Cyclops Blink malware to the number of publicly exposed systems identified through scanning, does represent similar orders of magnitude to the 1% infection ratio suggested by WatchGuard. 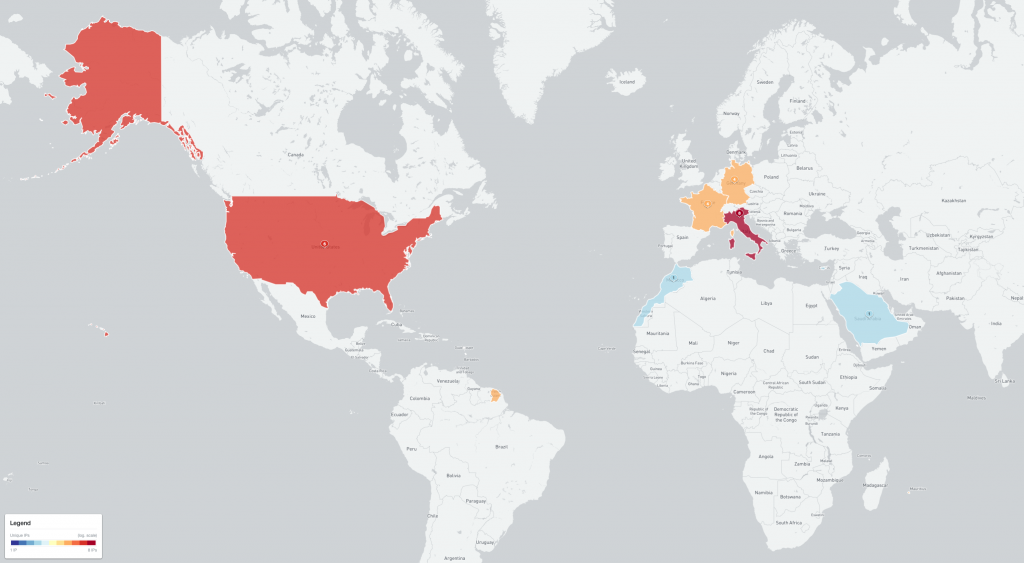 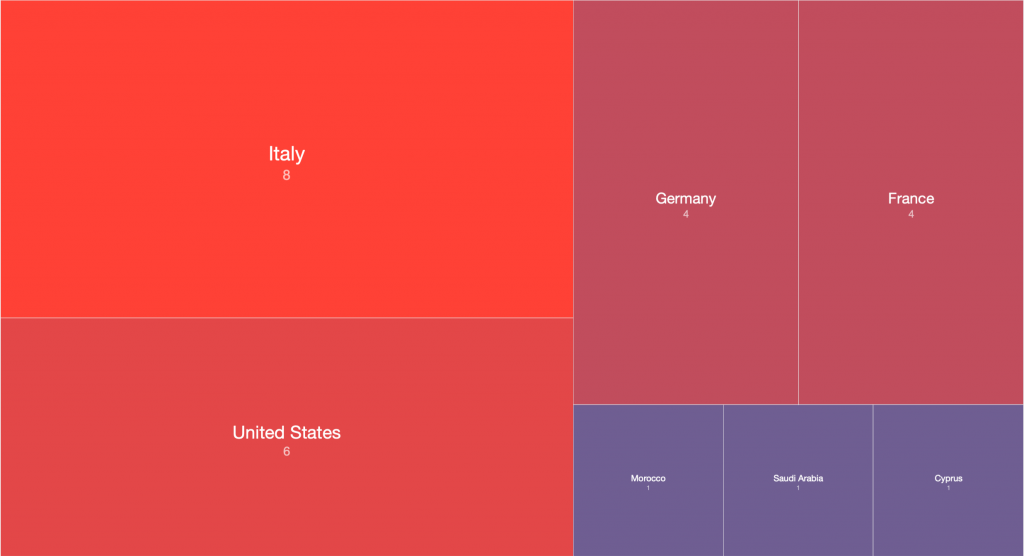 Not Yet Subscribed to Shadowserver’s Free Daily Reports?